When I was about 11 my older sister took me and my cousin to the movies in the city. We all wanted to see "Made In America", a new movie starring Whoopi Goldberg and Ted Danson. We laughed throughout the movie, afterall it was a comedy. It was about a young girl who finds out her "sperm donor"/father, is actually a white man and not an African American, as her mother had requested. The movie has been run on tv networks here in Australia ever since and it was always a movie I would make time to watch if I was home. How could you not like the movie? It was funny, it had two hillarious actors in it, not to mention Will Smith and it had a really happy ending, in which the girl's mother and her "sperm donor" fall in love. Everyone say "Awwwwwww!". 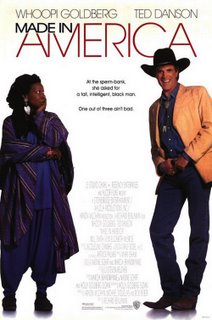 Never would I have dreamt that such a movie would become the only resource I had for the position I was to see myself in some 4 years later. Unlike the movie, there was no easy way of ever knowing more than a few little pieces of non-identifying information I had about my "sperm donor" and my mum didn't seem as funny as Whoopi did when she and dad told me the truth.
Posted by Rel at 9:13 PM

Hey Rel,
Can't wait for the next post! Love it!
-K

Finally I find[from the link from Beverly] a blog related to DI conceived people. Very interested to read your future posts!
I remember that movie too! but when i saw it i had already been told, i remember having this strange illusionary hope at the time.
-Myf[anwy] F.