The front page of The New York Times' business section reports on a new scientific breakthrough: a noninvasive blood test that can determine paternity while a child is still in the womb, as early as the eighth week of the pregnancy.

In other words, as soon as a woman finds out she is pregnant, she can find out who the father is.

The Times glowingly describes this new technology's many uses: "Men who clearly know they are the father might be more willing to support the woman financially and emotionally during the pregnancy." Even better, "state governments might one day pursue child support payments without having to wait until the birth."

The law cannot make a man into a loving father. But at a minimum, if he makes money, the law can enforce his financial obligations to his children. In the eyes of the law, biology alone is good enough to sustain a huge child support enforcement effort (with pitiful results, but at least the attempt is made). And for the economically marginal men who often father children out of wedlock, it's a huge cost imposed on the basis of biology alone.

When these children grow up to be adults who yearn to know who their biological father is (as many but not all do), they face a wall of angry derision for their unacceptable desire.
These are the planned fatherless. These are the adult children around whom an industry has grown. They are supposed to be grateful they are alive at all. They weren't given the choice, they didn't do the planning and now that many are beginning to find their own voice, the planners and choosers do not like it one bit.

"I thought it would be so easy to arrive, state the obvious that children need their fathers, and everyone would be like, oh my God, thank you for reminding us!" Alana, a woman conceived by a sperm donor and who runs the AnonymousUs.org story collective, said in the new documentary "Anonymous Father's Day." "But there is a huge monster of money and people desperate for children, who don't want me to make it harder for them to buy and sell children."

She recalls a story a colleague told her about one person's response to donor-conceived children with negative or ambivalent feelings: "Too bad you weren't the load your dad flushed down the toilet."

"People are extremely vicious," Alana reports, according to LifeSiteNews.

Why the vitriol? Oprah Winfrey's America is not generally a place where adult children are asked to silence their feelings about childhood troubles and trauma on the grounds of filial piety.

Single moms don't object when we point out that dads matter. They know they do, and if their children's fathers aren't there, they know whom to blame: the absent and unreliable dad. Adopted parents for the most part have less anxiety about the idea that biology matters. After all, children aren't deprived of biological connection by their adoptive parents (who are reassured to know that although biology matters, it cannot possibly compete with 18 years of loving support in a child's eyes).

Anxious parents, gay and straight, are right now planning families where they are going to deliberately and with much forethought deny their child any right to know his biological roots. They are creating families through IVF using donor sperm because biology matters to them (otherwise they would adopt). How do these adults cope with the idea they may be deliberately depriving a beloved child of something important, something that matters?

So far, mostly by shooting the messenger.

Knowing about your biological origins is a basic right

Opinion piece in The Age today, by a former sperm donor. Click HERE for more.
Posted by Rel at 1:16 AM 1 comment:

'Donor' children and the right to know 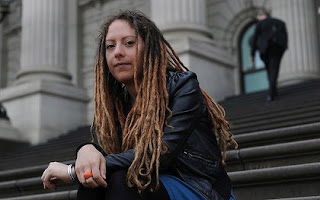 What a momentous day! Today I was privileged to hear that the Law Reform Committee are recommending FULL retrospective access to records for ALL donor conceived people. This means that as long as the Victorian Government agree with these recommendations I will be able to learn the identity of my biological father - T5. I can not stop smiling!!!
Please see the Tangled Webs press release here :)
I feel like what happened today was a dream.... we have been fighting so damn hard for this change. And it's true, a small group of committed people CAN change the world! Wow. Thank you to the Law Reform Committee and everyone who have supported us over the years to get to this place. I am honoured to be a part of Tangled Webs and now truly proud to be a citizen in this fine city.
Posted by Rel at 5:42 AM 3 comments:

that a small group of thoughtful, committed people can change the world. Indeed, it is the only thing that ever has. - Margaret Mead
Posted by Rel at 2:15 PM 3 comments:

Secrets of the Father Become the Mysteries of the Child

Narelle Grech, 28, was conceived via a sperm donor; recently diagnosed with bowel cancer, she is desperate to find her biological father. Photo: Craig Sillitoe

Should the children of sperm donors have the right to know their fathers?

THE journey to find out where she came from started more than a decade ago for Melbourne social worker Narelle Grech.

At the age of 15, Ms Grech's parents told her that she had been conceived through a sperm donor - news she has been trying to deal with ever since.

''Since I found out, I've been really curious to know who this person is, and then as I got older it became a whole lot bigger than that. It became about searching for my whole paternal family and those missing pieces that make up a lot of who I am,'' she said.

Ms Grech, now 28, became even more determined to find her donor a few months ago, when she was diagnosed with bowel cancer and needed to learn more about her genetic and medical history. But despite multiple attempts get information through the doctor who helped her parents conceive her, she's had no luck.

Across town, Paul (who did not want his surname used), also wonders about his family tree - but from a different perspective. A long-time blood donor, Paul, 59, decided to donate sperm in his mid-20s after separating from his first wife. Each Father's Day, he wonders what became of the four children he helped conceive through donations in 1978.

Now remarried with two adult children, he has registered his details with the Victorian voluntary register of donors and donor-conceived children, but has received no replies.

''When I donated, it had to be completely anonymous - I had to sign a document saying I wouldn't try to find the kids,'' he said. ''But I have often found myself wandering around looking at kids of about the right age, wondering who they are, how they are going, whether they need a hand.''

The question of whether donor-conceived children should have the right to access their donor's information (or vice versa) has always been a vexed issue; a balancing act between the right to privacy versus the right to know.

State Parliament has now re-opened the debate, as part of a broad-ranging inquiry by the law reform committee. The committee chairman, Liberal MP Clem Newton-Brown, said the inquiry would consider the legal and practical issues that arose if all donor-conceived Victorians were given access to information about their donors, and their donor-conceived siblings.

At present, the law varies depending on when the donation was made, resulting in a ''three tiered'' system. Victorians conceived using sperm donated after January 1, 1998, have unconditional access to information about their donors. Those conceived using sperm donated between July 1, 1988, and December 31, 1997, can access information about their donors if their donor consents. But those conceived before 1988 don't have the right to access, because donors have been granted anonymity.

For people like Ms Grech, the laws are frustrating and heartbreaking. For many donors, though, this is how it should be. Some were university students who made a donation for money; others did so for altruistic reasons and now have their own families. It is often argued that providing donor information could unfairly complicate their lives or risk making them financially liable.

Law Institute of Victoria president Caroline Counsel said the law should not allow the release of the personal details of either party without their consent. ''You cannot say after the event, 'We are going to superimpose a new regime of disclosure.' I think that is an abuse of an altruistic act,'' she said.

But film director Roger Clarke, who donated his sperm in the early 1980s, takes a different view.

Mr Clarke gave consent for his information to be passed on to his offspring. A few years ago he met Riley Denham, the 22-year-old man he helped create. The pair now consider each other as ''mates''.

''It was his lifelong ambition to meet me, so on his 18th birthday his mum and dad gave him the file,'' Mr Clarke said.

Mr Clarke said he understood most donors would want to remain anonymous, but thinks there could be a ''halfway point'', where non-identifying information, such as medical information, is accessible.

Read more: http://www.theage.com.au/victoria/secrets-of-the-father-become-the-mysteries-of-the-child-20110730-1i5fe.html#ixzz1Tf4by3xG
Posted by Rel at 7:15 AM 7 comments: